Chabot Fine Art Gallery is proud to present the works of Dominico Riccitelli, an artist who is published in Who Was Who In American Art with an Opening Reception on Gallery Night March 18th, 2010 from 5-9PM.

Dominico Riccitelli was born in 1881 in a small village near Naples, Italy and settled in Providence RI when he was 15 years old. He opened the first art gallery on Historic federal Hill on September 11th 1964 known as “The Little Art Gallery”. Riccitelli studied briefly at Rhode Island School of Design and exhibited at the Providence Art Club. He used an Impressionist style and technique  all his own including one that to varying degrees did entire paintings this way. The lemon-yellow light is very characteristic of his work often reflecting the late afternoon sun. He included the figure in his landscapes for scale and composition. His granddaughter, Lori Marshall brings his work to the gallery. 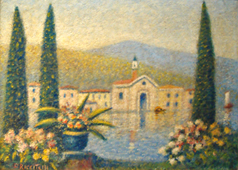